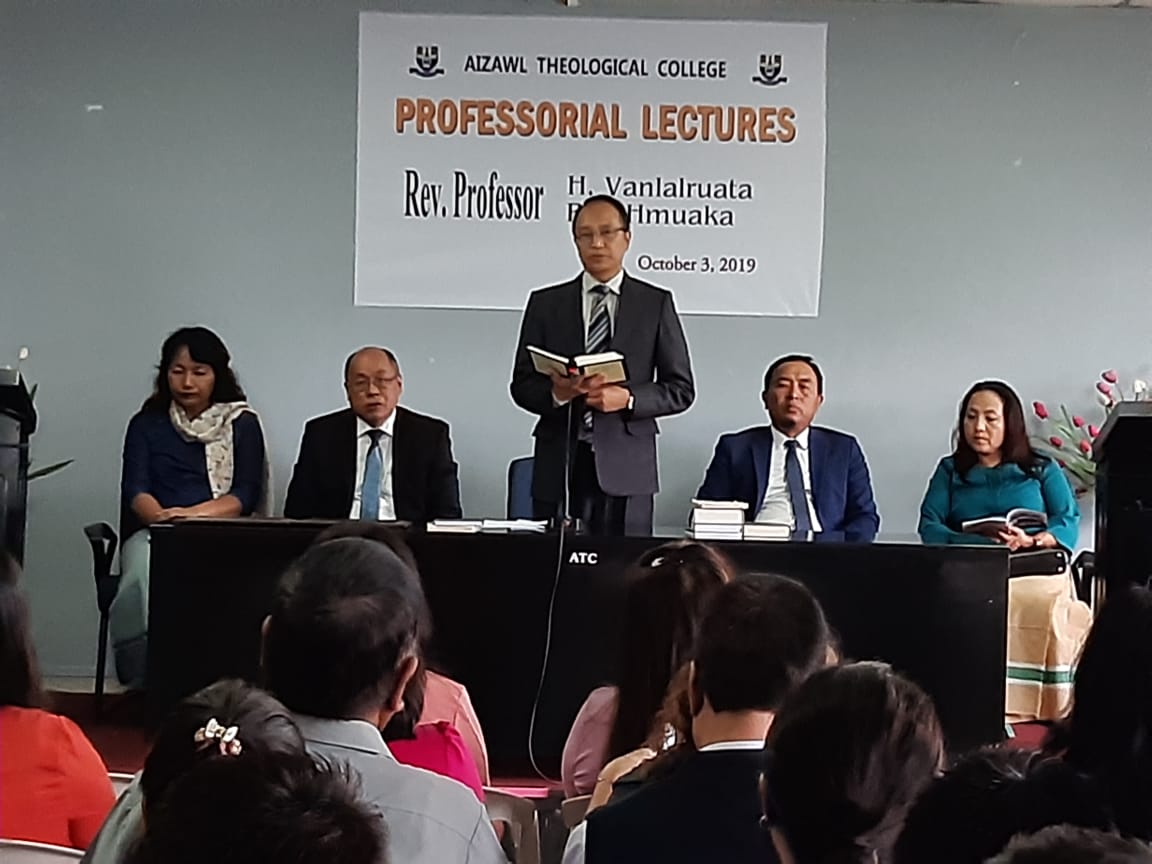 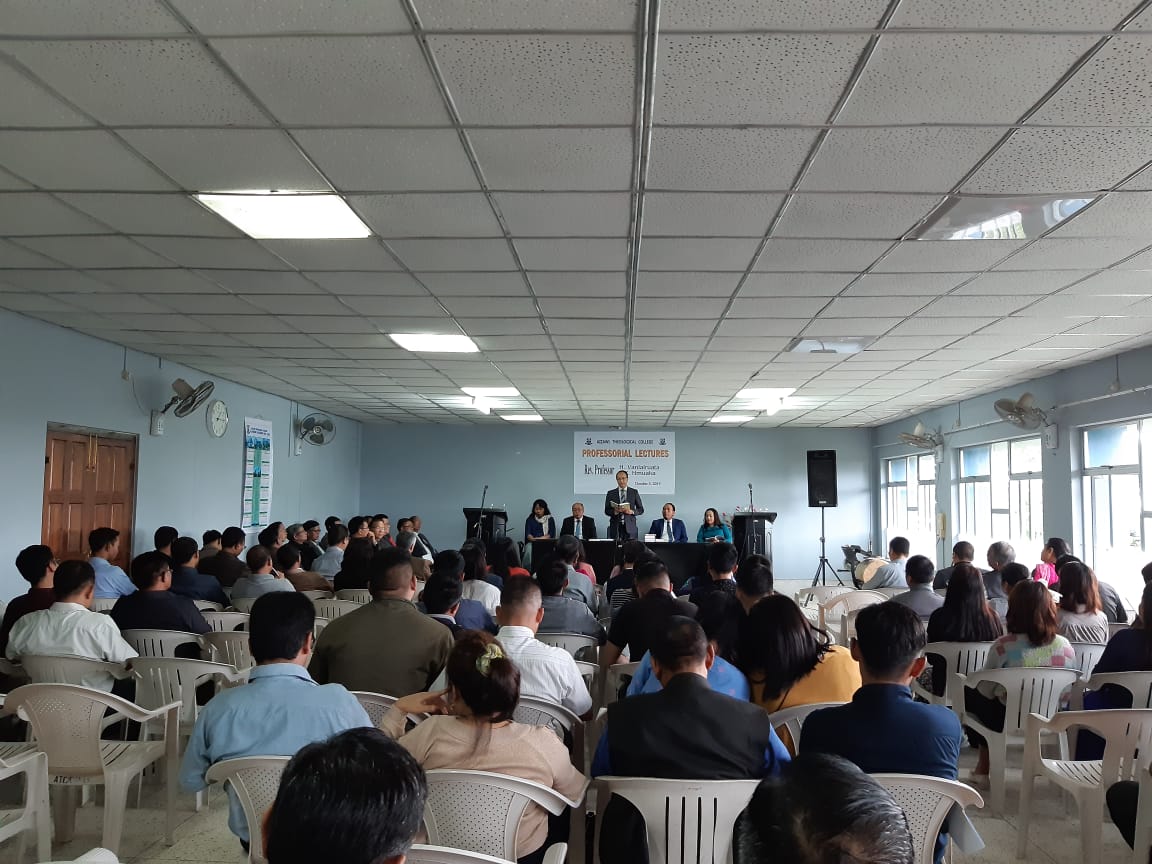 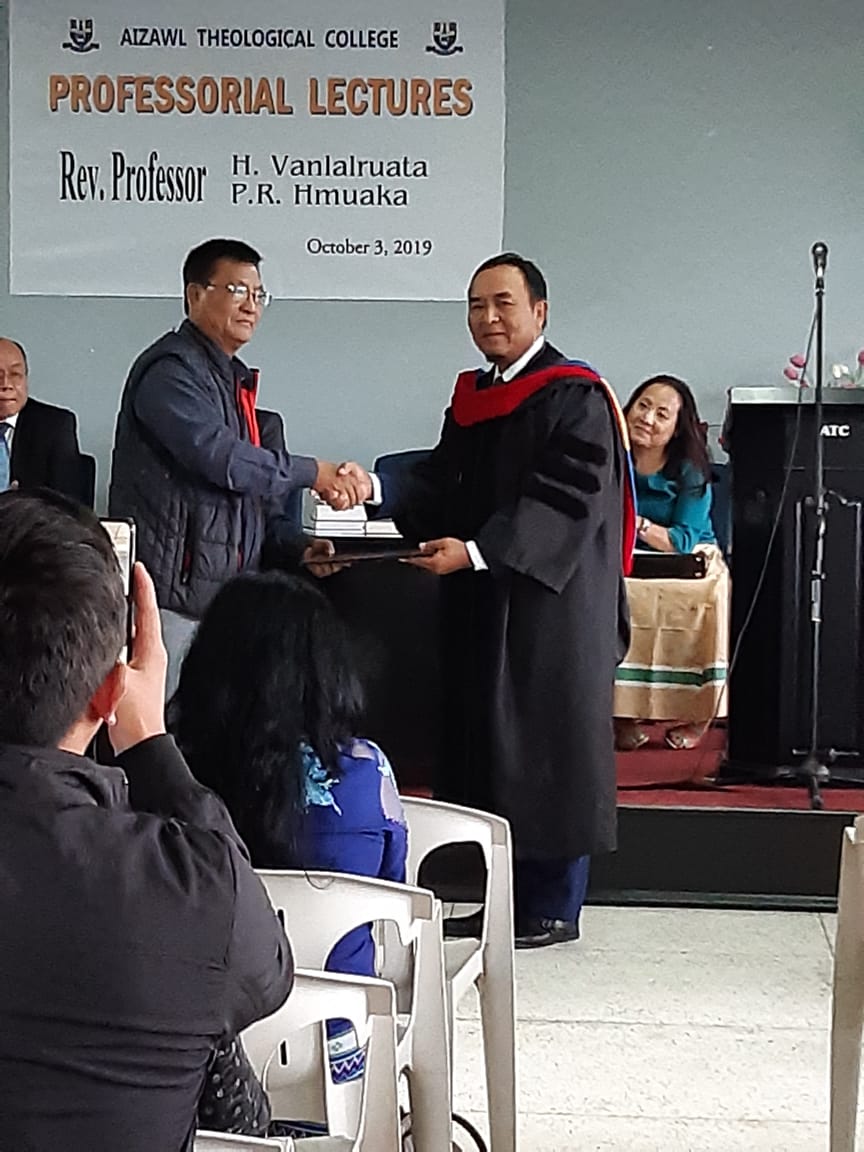 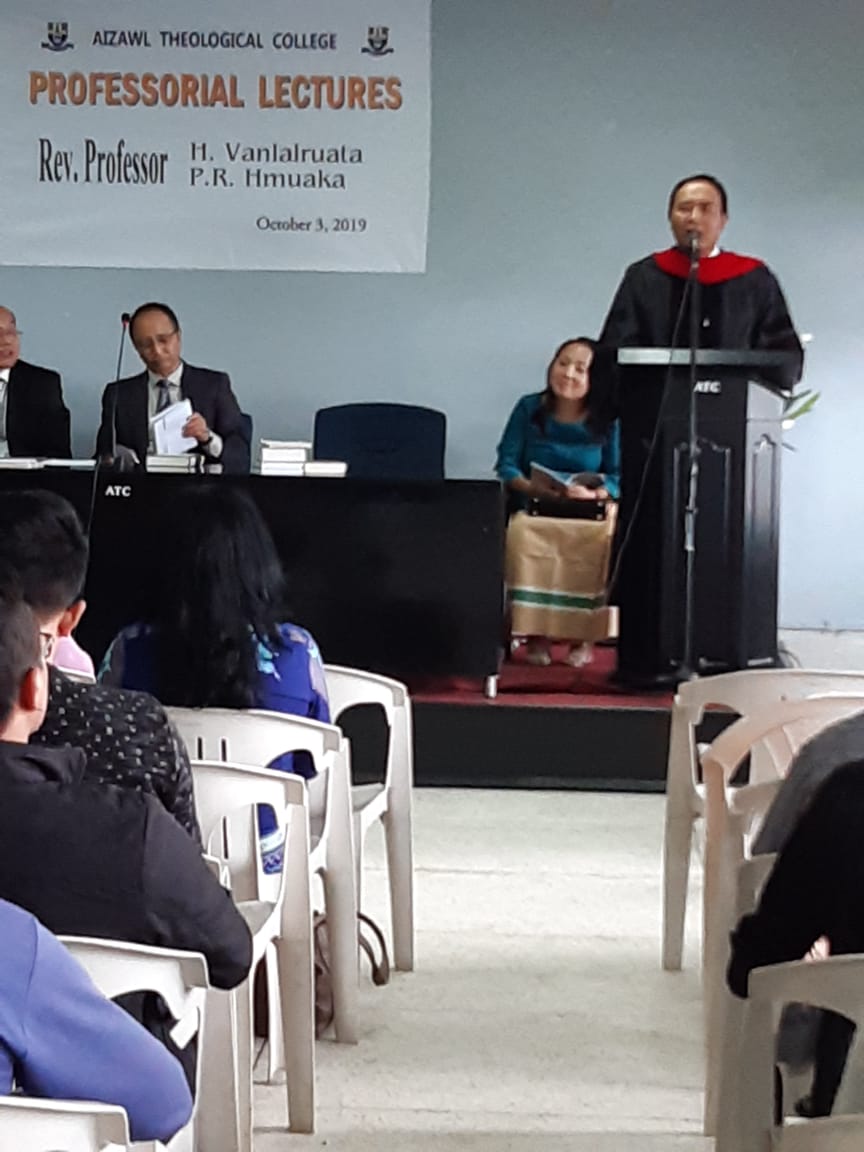 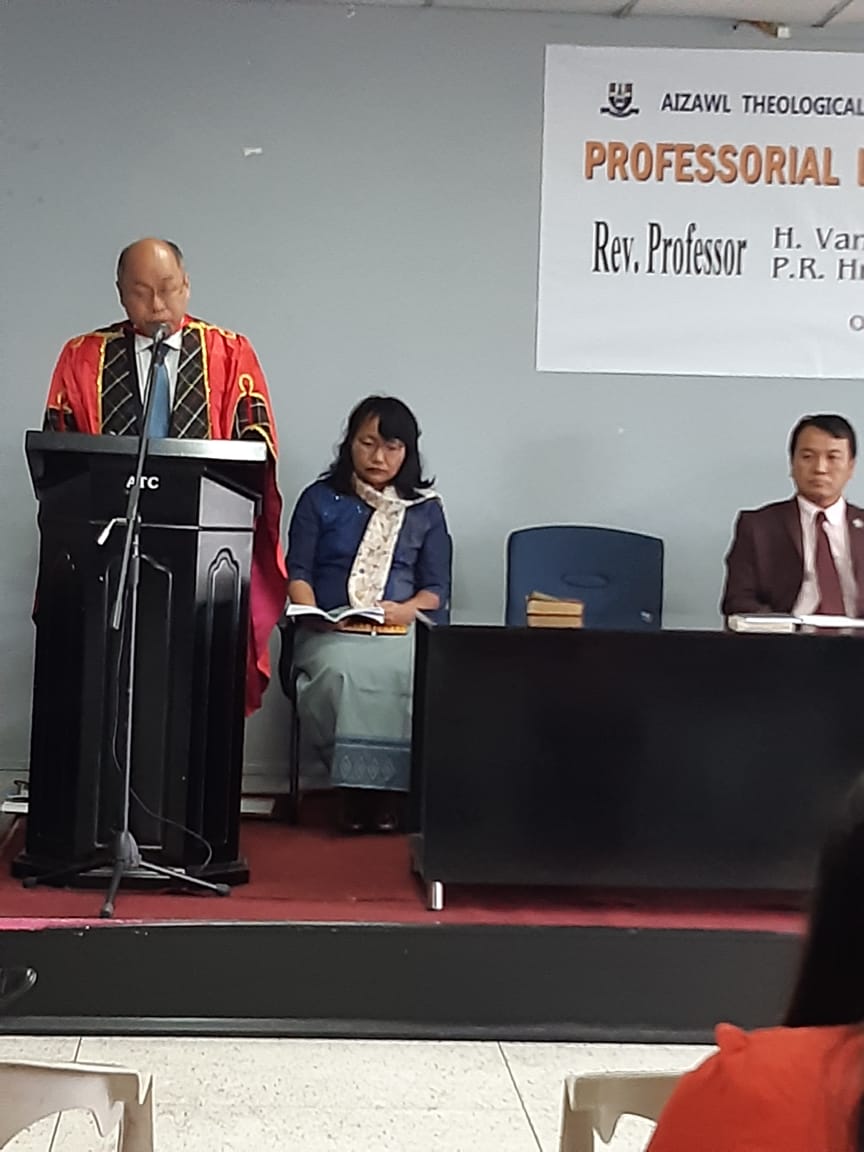 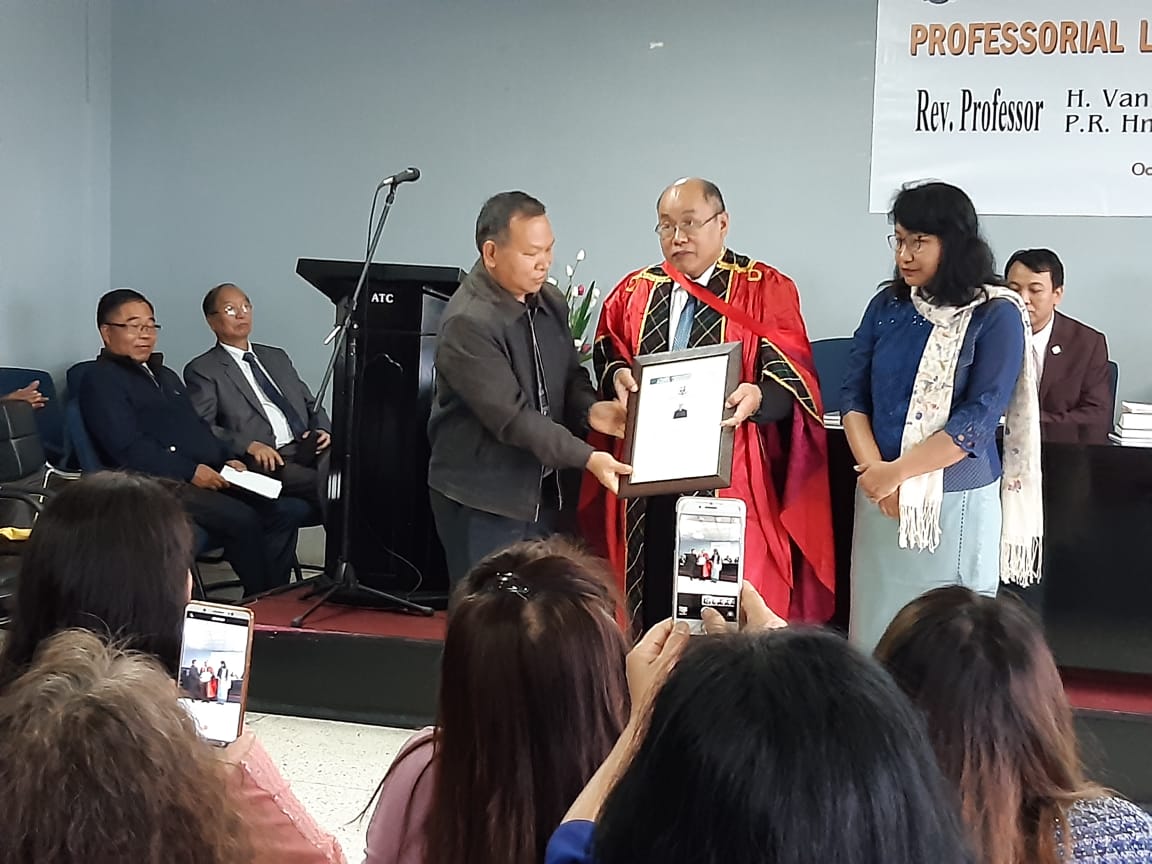 In recognition to and celebration of two Faculty members Rev. Prof. H. Vanlalruata and Rev. Prof. P.R. Hmuaka, who have been promoted to the rank of full professor, the Aizawl Theological College organised Professorial Lectures on 3rd October 2019 at the College’s D.E. Jones Hall. It was indeed a platform to showcase and celebrate the College’s new professors.

At the first session led by Rev. Prof. Vanlalnghaka Ralte, Principal of the College, Rev. Prof. H. Vanlalruata delivered a relevant lecture on theme: “Pastoral Response to Suicide with Special Reference to Mizoram Presbyterian Church.” After having explored various views on suicide and its related issues, the newly promoted Professor of Christian Ministry talked about problems of suicide in Mizoram. According to his research, suicide cases were seldom heard among the Mizo before the armed struggles that broke out in mid-1960s; but unnatural death including suicide alarmingly on the rise since 1970s. Prof. Vanlalruata rightly opines that the Presbyterian Church of Mizoram, which never had any written tradition concerning suicide before, is now under pressure to have a better and more positive practice towards suicidal death. Prof. Vanlalruata suggested that a Suicide Prevention Centre be established by the Presbyterian Church of Mizoram to render pastoral ministry to the suicide survivors and their families. He further urged the Senate of Serampore College to launch a new academic programme to cater the pressing needs of the people.

In the second session which was led by Rev. Prof. K. Lallawmzuala, another newly promoted professor, Rev. Prof. P.R. Hmuaka delivered a lecture on the theme, “Jesus and the Law in the Gospel of Law from an Intertextual Perspective.” Prof. Hmuaka, the new Professor of New Testament, attempted to answer the research question – Can we find a more positive relationship between Jewish Law and Jesus in the Fourth Gospel? Prof. Hmuaka made a critical attempt to answer this question by analysing Johannine texts, such as: 1: 1-3, 14-18, 45; 5: 46; 7: 14-52; 5: 17; 10: 34; 18: 31. He employed what he calls “Intertexual Method.” After carrying out a critical exegetical study of the selected texts, Prof. Hmuaka is convinced that there is a positive relationship between Jesus and the Jewish law in the Fourth Gospel.

After the delivery of the lectures, the participants have had a time of interaction with the new Professors by asking their main theses and academic concerns. This was followed by vote of thanks proposed by Rev. Lalchawimawia. The programme was closed with a benediction pronounced by the Rev. Dr. Lalchhuanliana, a former Principal of the College.

The Professorial Lectures have seemingly enhanced the academic ambience of the College, and it was obviously a good time to share theological knowledge broadly with the academic institutions in and around Aizawl city. The Aizawl Theological College used to hold Professorial Lectures when any member of the Faculty is awarded Professorship. In 2018, the same were held when Rev. Prof. Lawmsanga and Rev. Prof. K. Lallawmzuala were promoted to the full status of professor.